stay in the loop

We’re celebrating Women’s History Month all month long by spotlighting our favorite women-owned and women-founded brands you can support by shopping our Marketplace. This week, we’re chatting with Nicole Ledoux, the co-founder of 88 Acres. Her company makes awesome seed-based products, like granola, snack bars, and seed butters that are manufactured from a zero-waste bakery in Boston.

Read on to learn more about Nicole and 88 Acres’ humble beginnings as a way for her husband to enjoy seed-based snacks.

Who are you and what is your role at 88 Acres?

My name is Nicole Ledoux and I am the CEO and co-founder at 88 Acres Foods. It’s a Boston-based food company and we craft bars and butters with whole seeds and really simple ingredients, really to mimic how you would cook at home. We make everything in our allergen-friendly bakery and our goal is to foster a more inclusive and empowered community with our food.

Can you talk a little bit about the inception of 88 Acres? What inspired you to start it?

My now-husband and co-founder Rob and I met on Match.com, like, a million years ago. And on our fourth date, he almost died at the dinner table when his meal was cross-contaminated with either peanuts or tree nuts, both of which he’s really allergic to. And so, that was my trial by fire to food allergies. I grew up on an 88 acre farm and my family always had a really close connection with food. And I realized after that experience with Rob that there were people who had to treat food like a potential minefield. I saw what he had to go through to stay safe.

Rob wanted to be able to enjoy food the way that I enjoyed it. And so, I started by making him bars, which were the most difficult thing for him to find that were safe [to eat]. We were both training for a triathlon at the time so I started making him bars with seeds instead of nuts, so that we could both share them and eat them. And we worked out with a big community in Boston. And so it started where it was like, “Oh, Rob has these homemade bars, like can we have a bite?” And then it was, “Hey Nicole, could you make us some of those before our next ride?” And then it just kind of grew into this humongous animal that we weren’t really anticipating. We had a lot of interest and support from our workout community and the company was kind of born out of that.

What were you guys doing professionally before you made 88 Acres a full-time venture?

We were not in the food space. I spent the decade before 88 Acres working in finance in different trading and portfolio management roles—a super male-dominated industry. And Rob was in clean tech. So he worked for a number of clean tech startups before deciding to launch 88 Acres with me.

Finance! A very male-dominated world. The CPG food space is very similarly male dominated. And although you are working with your husband really closely, what has it like being a woman in this space that’s very predominantly male?

I think even though it’s still predominantly male, I feel really supported by other female entrepreneurs. That has been really incredible. I feel like I’ve really been able to find my people.

The difference that I’ve seen within the food and CPG space versus finance, for example, is that some of the strengths of being a woman are much more embraced and celebrated within CPG rather than within finance and trading. Like, I know a bunch of moms who are entrepreneurs and I think that the ability to have our kids growing up in our businesses is just something that I never really had… I could never really picture being able to do in finance. I work twice as many hours now as I did, but I have newfound flexibility. Pre-COVID, our now five-year-old’s favorite thing to do was to come to our office after pre-K and help us pack up boxes and bring them to the post office. And I would not have had the ability to do that in finance.

Though 88 Acres was born out of seed bars, you’ve expanded into butters and more. Can you talk a bit about the journey from seed bar to all of the products your team makes today?

When we were making bars in our crappy basement apartment and started to think about turning what was kind of like a side hobby, side hustle, into a real business, we never really wanted to start a bar company. The vision for 88 Acres was really to look around and continually solve problems that people like Rob and I were facing, right? Like, what are all the ways that we want to share food together? And bars were just one aspect of that.

The bar category is incredibly crowded. You walk down the grocery store aisle and you see hundreds and hundreds and hundreds of bars, but we had really carved out some white space in that there weren’t any multi-allergen-free options within bars. And there really weren’t any companies that were building products or their brand platform on seeds. By really celebrating what’s in our foods rather than constantly talking about what’s not in our foods, it allows us to really elevate the individual ingredients. And seeds are these incredible super food powerhouses where we can really celebrate the seeds rather than talking about how our products don’t have nuts or don’t have something else in them.

So bars were an immediate problem that we needed to solve for ourselves. But butters came out of a weekend conversation that I was having with Rob, where I was joking around with him that I gave up my beloved almond butter for love. And he’s like, “What does that taste like?” And it’s like trying to describe what the color blue is to like so meone who can’t see. So I was like, “It’s thick and it’s creamy. It’s got a lot of protein in it.” And through that conversation, I realized that Rob had never had any [nut] butter at all. The plain sunflower butter that was currently on the market looked and smelled [too much] like peanut butter and he just couldn’t get over that. And I was like, “You know what? I bet you I can make you a seed butter that you would love.”

So, I went back to the kitchen and [followed the] same process we had for the bars: Pulled out the seeds and started roasting them. The first batches of seed butter literally went in glass mason jars, and as someone in his early 30s trying any butter for the first time, it was really cool.

That is really cool!

Yeah. So, we were just, kind of like, picking our way through all the problem areas that we currently face and that is our research and development process. Sometimes it comes from pain points that our customers are seeing. We try to talk to as many people as possible and get an understanding of where the different opportunities are.

What advice would you have for women specifically who are trying to start their own companies, become entrepreneurs, just enter this CPG space?

I would say for moms specifically to not get sucked into the whole mom guilt or let that stop them from launching a business. We have two kids who have literally grown up in our company. Some of their favorite people in the whole wide world are people on our team and there’s like nowhere that they would rather be. And so, I think that it’s easy to get sucked into this whole, like, “I can’t work too many hours” or “I can’t do something because it’s not going to be right for my kids.” And I think that kids are super flexible and they want to be where you are. And I love the fact that our five-year-old can talk about, like, something being on sale or a new product. So that’s my advice for moms. And I think just for women in general, everyone has a superpower and it’s all about identifying what yours is and learning how to leverage that.

I think that also ladders back into what you were talking about earlier about community. You’ve found this community with other women entrepreneurs, and it sounds like some of your advice would be to build up a community around you. And just building up that support system.

Yeah, totally. It was really lonely and isolating when we first decided to start the company. And I realized that my entire previous network had to be rebuilt. I still love and respect all the people I used to work with but I needed to build that community here within food and CPG. And I see younger people who are starting out in this industry and they’re trying to figure everything out on their own. And we have learned more and have been able to avoid more pitfalls and disastrous outcomes because we’ve been able to build this amazing community.

And women want to help other women. And people within the food and beverage space want to help each other as well. So I completely agree with you about building a community around you. You can pick up the phone and ask all kinds of questions and finding people who are going to give really honest feedback and answers is absolutely critical to success, no matter what industry you’re in.

Finally, and maybe this is non-existent, when you’re not managing 88 Acres with your husband, what do you like to do in your free time?

Let’s see. This answer probably would have differed depending on when in our lives you asked this. Rob and I used to love to travel. Obviously for many reasons, we haven’t been able to do a lot of that lately, but we recently bought a house and it’s a fixer upper. So I have been really enjoying learning how to do woodworking and a bunch of projects, like how to do a shiplap wainscoting. That’s been really fun and it’s been a great distraction.

Previous Post: « What The Heck Do I Do With This Eggplant?
Next Post: Mediterranean-Inspired Salad with Roasted Chickpeas » 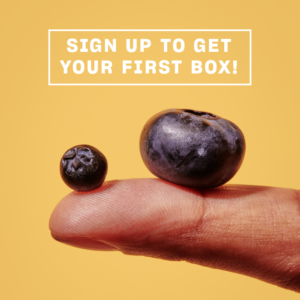